How do cataracts affect your vision?

Inside our eyes, we have a natural lens. The lens should be clear. With cataracts, your lens becomes cloudy. Things look blurry, hazy, or less colorful with a cataract. Most age-related cataracts develop gradually. Doctors cannot predict how quickly a person’s eye cataract will develop. 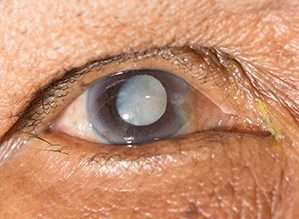 The most common type of cataract (found in people over age 40) forms mainly in the center of your eye’s lens. This is called a nuclear cataract. Another type of cataract is called a cortical cataract. This wedge-shaped cataract develops at the edge of the lens instead of the center. A posterior capsular cataract generally forms at the back of the lens, blocking light rays from reaching the retina. Posterior capsular cataracts usually develop faster than nuclear and cortical cataracts.

When a baby is born with a cataract eye or develops it during early childhood, it is called a congenital cataract. It can be due to genetics, certain health conditions or infection, or trauma before birth. Because a baby’s eyes and brain are learning to see, ophthalmologists want to make sure a cataract is found and treated early. Otherwise, having a cataract eye can affect the normal development of the eye-brain connection, leading to vision loss. Doctors usually find congenital cataracts during routine infant exams.

The aqueous humor, a clear fluid nourishes the eye’s lens in the front of the eye between the lens and the cornea. Aqueous humor provides oxygen and glucose (sugar) for cells. When someone with diabetes has uncontrolled blood glucose levels, cells in the lens can become cloudy and less transparent. Eventually, cataract forms, making things appear blurry, faded or tinged yellow.

Your ophthalmologist in Calgary replaces the cloudy natural lens of your eye with a clear artificial lens with cataract surgery. The new lens does not become cloudy again. However, some people do develop what is called a “secondary” cataract later after surgery. This is when the thin membrane that holds the lens becomes cloudy. With a quick procedure called a posterior capsulotomy, your ophthalmologist can use a laser to make an opening in the cloudy capsule, allowing light to pass through again for clear vision.

Studies have shown that very nearsighted people may have a greater chance of retinal detachment after cataract surgery. If you are very nearsighted and are considering cataract eye surgery, you and your ophthalmologist in Calgary can discuss this risk and eye surgery benefits.

Studies show that people with dark brown eyes have a higher risk of developing cataracts than people with lighter eyes.

UV light is a known contributor to cataract development, no matter what color your eyes are. Everyone should protect their eyes from the sun with 100% UV-blocking sunglasses and a wide-brim hat.

After having a cataract removed from one eye, most people probably will not have surgery on the other eye until that cataract begins to interfere with daily activities. However, when an ophthalmologist may recommend doing cataract surgery in the other eye, there are certain circumstances even if there are no vision problems. Replacing the lens in both eyes helps balance vision, an important way to reduce the risk of falling for some people (which can cause hip fractures). And for some, replacing the lens in the second eye can decrease their risk of developing a severe form of glaucoma called angle-closure glaucoma.

Love All Serve All